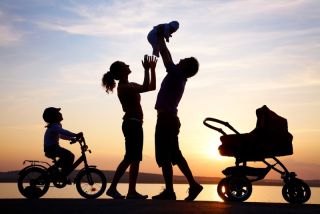 “We are a four-generation households,” said Jason Fitzgerald.

Fitzgerald, 45, and his wife, Rachel Zack, 41, bought a house with Rachel’s parents Beverly and Arthur Zack, who are in their 70s, and Rachel’s 98-year-old grandmother Lillian, who goes by “Bubbie.”

The home has six bedrooms, with five full and two half bathrooms.

They all live together in South Orange, New Jersey, along with Fitzgerald and Zack’s two children: one-year-old Ada and Lily, 6.

Even before the pandemic, “it seemed to make financial sense to combine our resources,” Fitzgerald said.

When Covid restrictions left them suddenly housebound, “it turned out to be a lifesaver,” Zack added.

“When I was working from home, it was wonderful for our daughter to have someone to play with, Jason and I could go take a walk, we could do things other parents couldn’t do,” she said.

But beyond the convenience of child care, living together affords a closeness that wouldn’t be achieved otherwise, she said.

“Part of this decision was financial but even more so, creating a community in our home,” she said.

“The gift we are giving our kids is an intimate relationship with their grandparents and great-grandmother,” Zack added.

Overall, multigenerational living is on the rise and has been for years.

The number of household with two or more adult generations has quadrupled over the past five decades, according to a Pew Research Center report based on census data from 1971 to 2021. Such households now represent 18% of the U.S. population, they estimate.

“Clearly, for some adults there are favorable aspects to it,” said Richard Fry, a senior researcher at Pew.

However, finances are the No. 1 reason families are doubling up, Pew found, due, in part to ballooning student debt and housing costs. Caregiving also plays a role in the decision process.

To that end, multigenerational living has grown the fastest among adults ages 25 to 34.

Not surprisingly, older parents are also more likely to pay for most of the expenses when two or more generations share a home. The typical 25- to 34-year-old in a multigenerational household contributes 22% of the total household income, Pew found.

For parents, however, supporting grown children can be a substantial drain at a time when their own financial security is at risk.

In an economy that has produced the highest inflation rate since the early 1980s, the cost of having young adults living at home has risen sharply.

But, overall, there is an economic benefit to these living arrangements, Pew found, and Americans living in multigenerational households are less likely to be financially vulnerable.

In the Zack-Fitzgerald household, expenses, including the home purchase, utility bills, groceries and cable, are split down the middle, and the dynamic has worked well, Fitzgerald said.

“It’s really efficient because there’s so much that would be doubled up if we were in separate households,” he said.

For now, there are no plans to ever live separately.

“It was and continues to be a blessing for us,” Zack said.

“We don’t have an exit strategy,” Fitzgerald added.